This deal has ended.

Use this Rubio’s Coastal Grill promo code to get two (2) entrees for $15 or four (4) entrees for $30 with a Rubio’s coupon.  Show the following coupon to cashier: 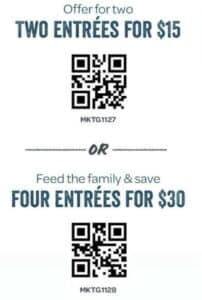 Promo code and coupon valid through May 7th.

Did the deal work for you? Hit the “Deal Feedback” link above and let us know!